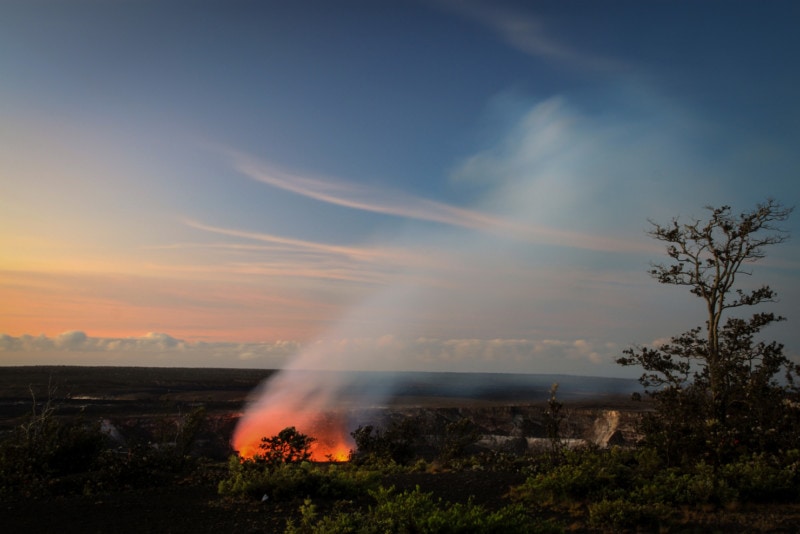 Halemaumau Crater is the heart of Big Island and a MUST when visiting the largest of the Hawaiian Islands.
The name is derived from the word for house (hale) and the Hawaiian name of the Sadleria fern, meaning fern house.
In Hawaiian religion, Halemaumau is considered the home of the volcano goddess Pele and is therefore especially sacred. Hawaiians often place colourful flower necklaces (lei) or a bottle of gin at the crater rim to appease Pele.

In the Hawaii Volcanoes National Park, you will witness a fascinating wonder that nature has in store for us. Located 48 km southwest of Hilo, this park is home to two volcanoes, including Kilauea, one of the most active volcanoes in the world. The unique spectacle of destruction and re-creation makes the park not only a sacred place but also one of Hawaii's most popular visitor attractions.

Hawaii Volcanoes National Park covers an area of 135 hectares from the summit of Mauna Loa to the sea. A 240-km network of trails invites visitors to hike extensively through volcanic craters, desert lava fields, and rainforests, passing a museum, petroglyphs, a walk-through lava tube, and two active volcanoes: Mauna Loa, which erupted for the last time in 1984, and Kilauea, which has been continuously active since January 3, 1983.

Until 1924, there was an active lava lake in Halemaumau but it cooled before a major eruption of Kīlauea. In March 2008, the cooled lava erupted again after 84 years. Since then, a lava lake in the crater floor of Halemaumau was continuously active until May 2018.
For safety reasons, it was not possible to enter the Kīlauea caldera for a long time and the Halemaumau could only be observed from some distance from the rim of the Kīlauea crater. The activity of the lava lake could be observed for several years through public webcams. The lava lake (about 250m long and 180m wide) had sunk into the floor of Halemaumau crater with nearly vertical walls. The distance of the surface of the lava lake from the floor of the Halemaumau crater fluctuated between 60m to 150m in recent years as the lava lake rose and fell.
After several weeks of volcanic activity and subsidence of the lava lake, a large ash cloud formed over Halemaumau on May 15.-17. 2018, partly after explosions. Subsequently, subsidence of the caldera around the crater of Halemaumau enlarged it by several times its previous size. After a green lake had formed at the bottom of the crater from 2018 to the end of 2020, a lava lake has been visible again since the beginning of 2021. The extent to which the crater is accessible, or whether the glow of the lava lake can be observed from the Jagger Museum, is left to the whims of the fire goddess. At the moment the national park is closed, but will surely reopen as soon as the situation has calmed down.

Kilauea is sometimes referred to as "the world's only drive-in volcano". In active times, the volcano produces about 200,000-500,000 m³ of lava per day. This volume would be enough to resurface a 32 km long, two-lane road every day.
Since January 1994, lava has created 200 hectares of new land on Big Island. Scientists can only make vague guesses about the future of volcanic activity - the current eruption could last another 100 years or be over tomorrow. According to many locals, the strong fluctuations of the volcanoes are subject to the mood of Pele, the goddess of fire who lives here. If during your visit the lava of Kilauea meets the sea, you should not miss this unique natural spectacle.

The park was awarded for its unique landscape and diverse nature by UNESCO in 1980 as a World Biosphere (Biosphere Reserve ) and in 1987 as a World Heritage Site.

The entrance fee for the park is 30$ and is valid for 7 days. Those interested in volcanoes are recommended to stay in Volcano Village for a few days. To explore the national park in all its facets (and also to hike), you can easily spend 2 or 3 days here. The accommodations in the rainforest on the volcano alone are an experience in themselves.

Pay a visit to the Kilauea Visitor Center at the beginning of your exploration to see the introductory film about the park, which is shown every hour from 9 am to 4 pm. In addition, there is an opportunity to speak with one of the rangers and book a guided tour with a ranger. Here you can also get maps to take home, interesting facts about the trails in the park and the latest information about current eruptions.

The sulfur banks are on the other side of the road. It only takes 5-10 minutes and the path is beautiful, a recommendation to stretch your legs and have your first experience with the activity of the volcano.

The Crater Rim Drive is a 17 km long road that leads around the crater area of Kilauea Caldera. Following this ring road will take you directly to the main attractions of the park: the Kilauea Overlook, Jaggar Museum, Halemaumau Crater, Devastation Trail, Kilauea Iki Crater Overlook and the Thurston Lava Tube.

Thomas A. Jaggar pioneered volcano research on Kilauea. Here you will find geological exhibits, maps and videos of scientific studies of volcanoes. At night, there is an impressive view of the smoking vent of Halemaumau crater.

Steam and smoke rise from this massive crater, home to the fire goddess Pele according to legend. Especially at night, the glowing lava coming out of the crater is an awe-inspiring sight. There is also a great viewpoint at the Jaggar Museum. In the mid-19th century, this crater was still filled with lava, but it gradually drained away. Today, the lava lake in the bottom of the crater is continuously active again. This place is considered a sacred site, so you should treat it with respect. Also note that temperatures can drop relatively quickly with increasing altitude. If you want to visit the crater after the beach and are only wearing shorts and a t-shirt, be sure to pack a light jacket as well.

Walk through a 500 year old lava cave. These lava tunnels are created by the outer areas of a lava river cooling faster, and over time this causes a crust to form on the edges of the river. At the end of the tunnel, a tropical rainforest awaits.

The Chain of Craters Road branches off to the south from Crater Rim Drive. The end point of the 1 km long road is finally the place where the lava ran over the road.

Built in 1846 as a grass hut, the Volcano House Hotel has been in operation ever since, offering magnificent views of Halemaumau Crater. At the time, no less a person than Mark Twain stayed here during his visit to Hawaii.

Florian
For me as a volcano-interested person, the national park is a MUST on every Hawaii trip. Also because the conditions change again and again. If one could still drive by car around the crater in 2007, I had the luck to observe the glowing lava lake from the Jagger Museum a few years later. Also at night one may and should drive into the park. On starry nights, when the Milky Way can be seen above the crater and shooting stars seem to fall into the crater, it is an unforgettable experience. Then in 2016, I ventured on a forbidden adventure and approached the active lava lake to get a glimpse of Pele's bubbling cauldron directly from the rim of the crater. This will probably remain my most exciting experience at Kilauea.
Our checklist & tips:

Waimea is located on the north coast of Big Island and is a real cowboy town. Since Waimea also exists on Oahu and Kauai, it is a...

This beach park is one of the most attractive swimming beaches on the Big Island, ranking among Hawaii's top 10 most beautiful beaches....

A small bay south of Kona, which is just for snorkeling and by its so colorful underwater world a popular...

Kailua-Kona has become world famous for several things. First and foremost probably by the triathlon "Ironman", which since 1...

In the northeast of the island, the Hamakua Coast stretches between the capital Hilo and the village of Kukuihaele. An et...
Menü
Oahu
Maui
Big Island,
Kauai
Molokai,
Lanai
All Hawaii Islands
Overview of all islands & background info