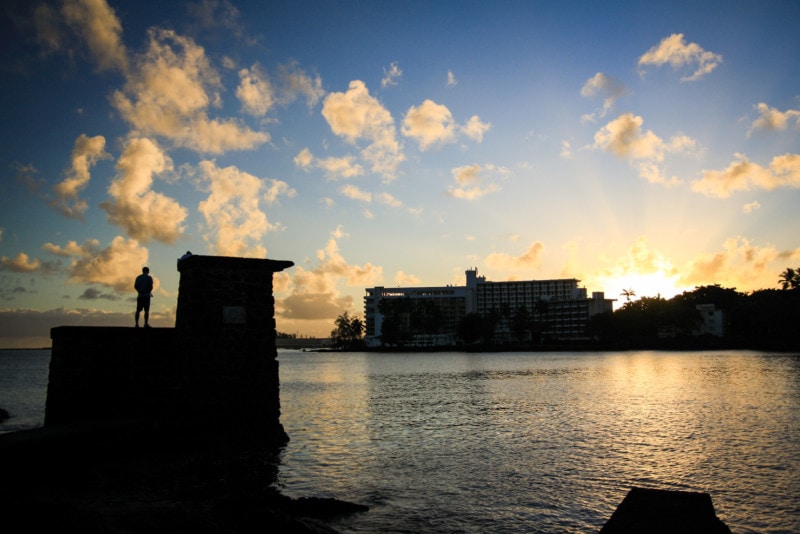 Hilo is the largest city on the Big Island with a population of over 47,000. It is also the capital of Hawaii County and thus of the entire island. Hilo is framed by Hilo Bay, which has often been the victim of a tsunami.

Around 1900, people began to build a protective wall at Hilo Bay, but it proved useless when a 14-meter tsunami destroyed most of the city in April 1946. 159 people lost their lives. The cause of the tsunami was an earthquake off the Aleutian island of Unimak. As a result, the Pacific Tsunami Warning Center was built, which can detect and predict tsunamis at short notice with the help of sensors throughout the Pacific. On May 23, 1960, Hilo was hit by a tsunami again, in which 61 people lost their lives. The main cause of the high death toll was ignoring the warning signals. This tsunami was triggered in Chile and was the strongest quake of the 20th century with a magnitude of 9.5.

The location of the city is responsible for Hilo being one of the rainiest cities in the world. Over 3000 mm of precipitation falls annually. Due to the location on the rainy side of the island, the number of visitors on the "Hilo-Side" (east side) is significantly lower than on the warmer, dry west side. The "Kona-Side" has therefore a larger tourist volume. Nevertheless, almost a million visitors come to this small town every year with its 1950s flair, which even has its own university. Hilo is a popular starting point for visits to Hawaii Volcanoes National Park, which can be reached quickly via Highway 11. Helicopter flights over the volcanic areas also depart from Hilo airport. Or the famous Saddle Road, which runs from east to west and is unique because of the different vegetation and climate zones.
Nevertheless, or even because of the many rainy days, Hilo can offer some unique highlights. Where there is a lot of rain, there is also a lot of vegetation. As the Hawaiian say so well: "No rain, no rainbow. No rain, no waterfall". Therefore, in Hilo, you will find, among other things, numerous beautiful gardens with exotic plants, a dream for every nature lover.

Once in Hilo, there is something to do for everyone, from culture to shopping to nature adventures. In Hilo, you will find a lot of sights, like the Imiloa Astronomy Center of Hawaii (for star lovers), the Pacific Tsunami Museum or the Mauna Loa Macadamia Nut Factory. Shop your heart out at the Hilo Farmers Market and then relax at Queen Liliuokalani Gardens. During the Merrie Monarch Hula Festival, which takes place every year in March/April, all accommodations are fully booked. It is recommended to book early.

Florian
Sun lovers are better off on the Kona side in comparison to the west. But the Hilo side in the east is more attractive. Due to the higher rainfall, there is much more lush vegetation, waterfalls (Rainbow Falls, Akaka Falls) and scenic roads leading through beautiful jungles. However, I experienced Hilo mostly in the sunshine. So it is not that bad with the rain. Also, from Hilo, the Volcanoes National Park or the towns of Pahoa and Kalapana can be reached quite quickly within 40 minutes by car. If I had to choose a site (and also the associated airport) due to limited vacation time (2-3 days), I would choose Hilo. However, if you spend a whole week on Big Island, you will manage the whole island. Another tip: For the arrival, I recommend an early flight. First of all, they are much cheaper than during the day and secondly, you will directly see the sunrise in Hilo! Backpackers can stay at the "Hilo Bay Hostel". (101 Waianuenue Avenue, www.hawaiihostel.net). You should not have large expectations here but for 32$, you get a bed in a sea view room and you can be in the city or by the water in a few minutes on foot. If you prefer something closer to nature, you can stay at Arnotts Lodge near Richardson Beach Park.
Our checklist & tips:

If you want to experience a piece of original Hawaii, a visit to the former fishing town of Kalapana is not to be missed.

Opinions differ about this hiking trail. Is it okay to walk it or not? In the "Ultimate Guidebook of Big Isla...

In the north of Big Island there are 7 deeply cut valleys. The only one that can be hiked is the ...

At a distance of about 5 km from Hilo airport, you would hardly expect such a wonderful place. The bathing p...

Kealakekua Bay with Captain's Cook Monument is probably one of the most historic sights in Hawaii and is located in the...

Waipio Valley is a significant place for the Hawaiian people. The valley has been inhabited for over 1,000 years and sp...
Menü
Oahu
Maui
Big Island,
Kauai
Molokai,
Lanai
All Hawaii Islands
Overview of all islands & background info