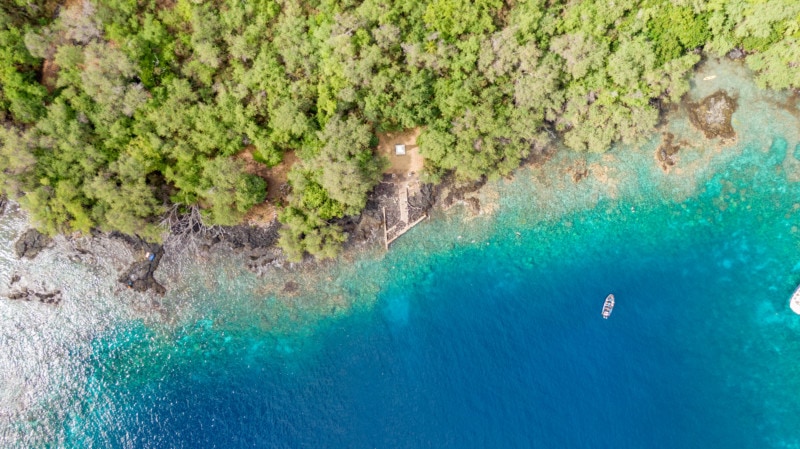 Profile of the hike

Kealakekua Bay with Captain's Cook Monument is probably one of the most historic sights in Hawaii and is located 19 km south of Kailua-Kona. Here the British navigator was killed by the locals on 14.02.1979. After Cook landed in the bay on Thanksgiving Day in honor of the Hawaiian fertility god "Lono", the Hawaiians initially thought he was Lono. Accordingly, Cook behaved like a god, which the Hawaiians did not like at all. It came more and more to the quarrel, which also led to fisticuffs and finally to the death of some Hawaiians and also to the death of Captain Cook. A white obelisk on the shore of Kealakekua Bay State Historical Park commemorates his death. On the east side of the bay you will also find the Hikiau heiau (sacred temple) dedicated to the Hawaiian god Lono. Today, the bay is known for one of the best snorkeling and diving spots in the Hawaiian Islands. It is even designated as a Marine Life Conservation District and offers the best conditions due to its rocky coastline and preserved corals. Colloquially, it is also called "Dolphin's Bay" because flocks of spinner dolphins rest here during the day from hunting at night.

To visit this bay, there are 3 options:

With a Hike, with a Touri boat or on your own with a Kayak

At State Hwy 160 (Napoopoo Rd) in Captain Cook above the Bay, you can park your car and hike down to the Bay. With 6 km and 400 meters of elevation, the hike can be classified as moderate. In good weather, however, it is still very sweaty due to the incline. Once at the bottom, you can rest in the shade of a small forest and do some snorkeling in the clear water. The visibility is bombastic underwater with a few meters and much better than on sandy beaches. In front of the coast there are beautiful coral reefs with lots of tropical fishes, among others rarities like the lizard fish or the butterfly fish.

For snorkeling tours around the bay there are numerous providers such as "Fair Wind Cruises", which can be found between Kailua-Kona and Captain Cook. These providers have the advantage that you do not have to worry about anything, but they also have the big disadvantage that the time is limited to 3-4 hours and you have to share the bay with tens of other tourists and the water can get quite crowded. In addition, they are also quite expensive with 70 to 200 $. But often these boats also offer lunch, drinks and interesting facts about the Bay.

The big bay itself can only be reached by a 30-minute paddle with a kayak. For vacationers who want to discover the underwater world of the Big Islands in a simple way without expensive tours, this is the best and cheapest option. Those who come from the water by kayak and want to go ashore at the Cook Monument to visit the monument in more detail, need a Permit for Individualswhich you must request by mail from the state park administration. However, it is also possible without a permit, but then without shore leave. So for snorkeling you have to leave the kayak on the water and also get back in. Sounds impossible at first sight, but is easier than thought. The kayak operators of "Ehu & Kai", which are located in the immediate vicinity on the coast, show you how: While one person lays across the kayak, the other person can get in and out. This is how the balance of the kayak is maintained. If both people are in the water, the kayak is unceremoniously tied to the foot so that one does not lose it. This provider is the cheapest way to reach the Bay from the sea. For 45$ you can rent a kayak here for 5 hours and have enough time to explore the Bay, swim with dolphins in their natural habitat and to do some snorkeling at Cook Monument.

Florian
This tour is an absolute MUST for all snorkeling enthusiasts. I myself did the tour with a kayak. When you are in the middle of the bay, it is recommended to get out of the kayak and lie quietly and stretched out in the water. You have to be very unlucky not to see dolphins. Most of the time they are out in the morning, resting from the night hunting in the Bay. After a short time in the water you will see the Spinner Dolphins below you. Often in whole flocks and families. They jump out of the water, spin (from the English "to spin"=to spin) and seem to be the best playmates in the world. It is reported that they even jump over the kayaks sometimes. Once you have experienced the friendly laughter of a dolphin under water, you will never forget this moment. This trip is one of my fondest memories ever. After swimming with the Spinner Dolphins, you can continue paddling to Cook's Monument and still snorkel there. It makes perfect sense to look for a place to stay for one night in Captain Cook, in Kailua-Kona or best directly in the small town at the bay, if you want to be on the water early in the morning. Besides, a few hours on the water make you very tired, so you'll be glad if you don't have to drive long distances by car afterwards.
Our checklist & tips:

How did you like Kealakekua Bay (Captain's Cook Monument)?

Waimea is located on the north coast of Big Island and is a real cowboy town. Since Waimea also exists on Oahu and Kauai, it is a...

The large beach park near the city of Hilo is especially suitable for families, as the sea here is very shallow and...

If you want to experience a piece of original Hawaii, a visit to the former fishing town of Kalapana is not to be missed.

Waipio Valley is a significant place for the Hawaiian people. The valley has been inhabited for over 1,000 years and sp...