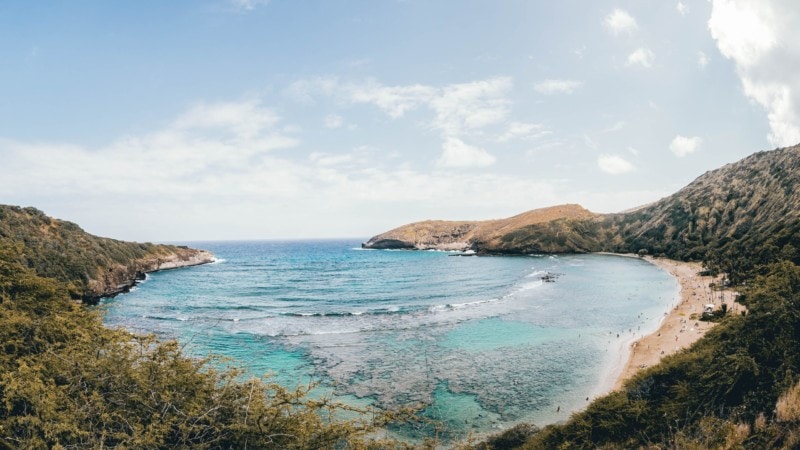 A dazzling underwater world, fine white sandy beach and the best snorkelling spot on the whole island are promised. We are talking about the famous Hanauma Bay. Just a short distance from popular Waikiki, this beautiful bay is located in the east of Oahu. The underwater world is protected but it is still accessible to the public, subject to a few rules.

We would like to give you some information about Hanauma Bay and give you some rules at the same time to protect this underwater world.

The curved bay was formed from an extinct volcanic crater and is known for over 400 species of fish, such as parrotfish, yellow surgeonfish and numerous green sea turtles. If you are lucky, you can also spot sea lions enjoying the sun on their bellies. Surrounded by the green landscape of Hawaii, the bay offers its visitors a fascinating sight even from the road. Green nature, white sandy beach with isolated palm trees and turquoise blue water enchant the hearts of visitors immediately. But it is not quite so easy to get down to the bay. Since 1976, Hanauma Bay has been declared a nature reserve and there are some important rules and regulations to follow. Visitors are taken to the Marine Education Center directly after purchasing the ticket and are shown an instructional video about the most important behaviours to protect themselves and their precious nature. Once you have done this section, visitors head down to the bay for a swim, snorkel or simply to enjoy the sun. Visitors who want to avoid the midday heat and enjoy the bay with fewer crowds should better come to the bay in the morning. At noon as well as in the afternoon, the famous bay becomes a popular destination for travellers and locals.

The visit of Hanauma Bay

It is part of almost every traveller's life in Hawaii to visit the famous Hanauma Bay for half a day or a whole day and to explore the dazzling underwater world while snorkelling. From Waikiki, the journey is very easy and can be mastered by rental car, Uber or public transport. For those arriving by car, paid parking is offered near the entrance. To enjoy the bay without a lot of crowds, it is recommended to be there early. There are around 3000 visitors on site daily, which means that during peak times at noon, there may be longer waiting times at the entrance.

Once the ticket is purchased and the entrance area is passed, visitors are asked to enter the Marine Education Center. Especially in the 80s, Hanauma Bay had big problems with garbage as well as inconsiderate visitors, which caused damage to the nature reserve. The attempted solution was the Education Center: Every visitor goes through the same process before being allowed to enter the bay. In a room, an educational video explicitly defining the rules and behaviours awaits the guests. Thus, visitors protect both the habitat of the animals and plants and themselves. Once the video is over, access to the bay is open.

A steep, paved road leads visitors down to the beach. Those who wish can walk this way in a time of about 5 to 10 minutes, alternatively, there is a shuttle service for about 1 dollar, which takes visitors from the Marine Center to the bay.

Once arrived, visitors are greeted by a soft white sandy beach. But visitors are offered even more. To enjoy a relaxing day, guests need to know that their valuables are safely stowed away. Lockers are available for this purpose. Likewise, very few vacationers have their own snorkelling equipment with them. But don't worry, fins, goggles and snorkels are available for rent on the beach.

Now, nothing stands in the way of the adventurous underwater world. On their own - but please respect the rules - guests can swim to marked buoys in the open sea, marvel at the colorful fish and corals and look out for sea turtles.

To ensure that visitors comply with what is taught in the instructional video, several supervisors on the beach meticulously monitor the goings-on of the bay and point out incorrect behaviour without mincing words.

The rules and conduct of Hanauma Bay

The history of Hanauma Bay

The bay has been "Oahu's treasure" to visitors for many centuries and even millennia to locals." Created by a volcanic eruption, the distinct bay forms a natural marine ecosystem that has been designated a nature reserve since 2002. The name is composed of the words 'Hana' means bay and 'uma', which defines the curves of Hawaiian canoes. As early as the beginning of the 19th century, the breathtaking bay was a favourite meeting place of nobles and royalty of the time. According to records, they met in the bay to spend time together, socialize and fish together.

Around the turn of the century, you could observe the first developments of the bay. Thus, in 1931, paths and roads were paved and the first washrooms and toilets were built. Also, a holding rail was built next to the sidewalk to better manage the steep path into the bay. Enormous progress came after World War II. New showers and toilets were built and quickly Hanauma Bay became known as natural beauty. Every tourist wanted to see the dazzling bay with his own eyes, snorkel there and get a tan in the bright sun.

These tourist changes brought unexpected consequences. The many tourists left garbage, collected corals and shells and damaged the colourful coral reefs to the point of death. Consequently, the bay was declared a nature reserve in 1967 and from 2002 the measures were tightened. The Marine Education Center was established and every visitor has to watch an educational video about the protection and conservation of corals and marine life and agree to the rules before entering the bay.

Good to know - Tips and preparation

In the south of the island, just a few kilometres from Waikiki, the bay is located near Koko Head Crater. If you arrive with your own car or rental car, you just have to drive on the freeway H1 and turn right at the hill after passing the village of Hawaii Kai. Usually, the access road is also signposted or you can see instruction personnel for the parking lots.

Parking is provided at the bay but is strictly limited and subject to a fee. Thus, only 300 parking spaces are available for use and cost $3 per car.

The alternative to a rental car is either Uber or simply the public bus. Bus No. 22 departs from Waikiki every few minutes. The fare is $2.50 and the bus takes its guests to the Hanauma Bay parking lot.

For the protection and recreation of corals and marine life, the bay is closed to the public every Monday and Tuesday. On all other days, opening hours are from 6:45 am to 4 pm, with the last admission for visitors at 2 pm.

The price for an adult is $12. Children under 12 may visit the bay free of charge. As a method of payment, in addition to cash, many credit cards are accepted.

Guests can bring their own drinks and snacks or purchase something in the stores next to the ticket booths. Bags or backpacks can also be taken to the bay without any problems. Lockers are available for belongings. You can also bring your own snorkelling equipment. For those who do not have their own equipment, snorkels, fins and goggles are available for rent next to the lockers.

Tommy
Hanauma Bay is certainly one of the most famous spots on the island but unfortunately also accordingly overcrowded and destroyed to a large extent. This is partly due to the construction of a telecommunication line through the reef and also due to an enormous tourist flow in the 80s. Fortunately, since the 90's the maximum number of people allowed is limited by the City & County of Honolulu and entrance fees are charged. But quite a few tourists still don't follow the rules step on the coral, leave trash behind and disturb the marine life. We don't want to be one of the big "spoilers", but nevertheless our appeal to you to stick to all the rules of the short instruction video. And if you want to give something back, donate at least a small contribution additionally to the friendsofhanaumabay.org. The inhabitants of the bay, which you were allowed to admire with enthusiastic eyes before, will thank you ;)
Our checklist & tips:

A few minutes' walk from Hale'iwa Town is Ali'i Beach Park, a lawn park with narrow...

Oahu's Paradise in the East of the Island Turquoise waters and endless fine white sandy beach, which slopes gently into the sea....

Nānākuli Beach is one of the top beaches on the west coast of Oahu. The sea is turquoise blue and crystal clear, the sand soft and...
Menü
Oahu
Maui
Big Island,
Kauai
Molokai,
Lanai
All Hawaii Islands
Overview of all islands & background info