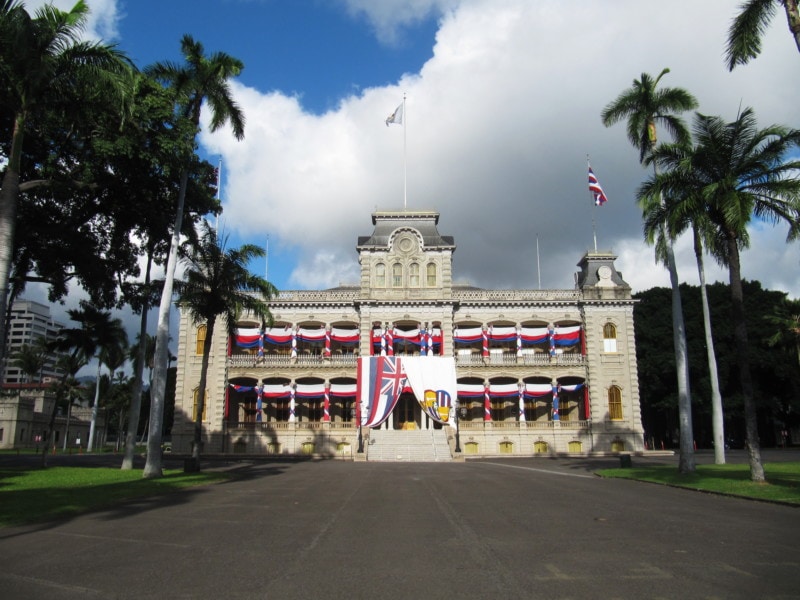 On the traces of Hawaii's past

Once the official residence of Hawaii's monarchs, the royal palace is visited by thousands of visitors each year. It stands in the middle of downtown Honolulu, surrounded by state-of-the-art skyscrapers in the Hawaii Capital Historic District. It represents the country's independence.

King David Kalakaua had the palace built in 1847 and it was only after the fall of the monarchy in 1893 that the palace was no longer used as a residence but for Hawaiian government purposes. After the attack on Pearl Harbor, for example, the palace served as the headquarters of the U.S. Army. It was not until 1959 that government and state offices were relocated and the first governor of Hawaii arranged for a $7.5 million restoration of the palace.

In modern times, the Iolani Palace is a well-known museum. It is open to the public and attracts locals as well as visitors from all over the world, inviting them to explore the two floors full of historical background and immerse themselves in the events with the help of various tours.

The history of the Iolani Palace

Strictly speaking, the magnificent Iolani Palace in Downtown is not the first royal palace. When King Kamehameha III moved his royal residence from Maui to Oahu (Honolulu) in 1845, he chose this magnificent palace in a coral block building, which was also named Iolani Palace.

The Iolani Palace we know was not built until the reign of King David Kalakaua in 1847. With him taking over the throne, Kalakaua originally wanted to move into the already built Iolani Palace. But here time left its mark too: the coral block building was in the worst possible condition and prompted Kalakaua to build a new one instead of renovating it.

He chose a style called American Florentine, which was characterized by unique features of Italian Renaissance architecture. He had elements incorporated that were significant to Hawaiian culture and represented its character. It was to have four magnificent corner towers, with two central towers in between, as well as covered porches that circled the entire building on the first and second floors.

The interior was also pompous and advanced for the age. Some installations were complex for the time, such as a flush toilet, and the palace had electricity before other buildings, such as the White House in Washington. The walls, furniture, and decorative items were elaborate and the reception area, suites, dining and living rooms shone with splendour.

The fall of the kingdom of Hawaii

King Kalakaua died only 2 years after moving in and Lili'uokalani, his sister, was the heiress and became ruler of the Hawaiian kingdom. She mastered her royal duties well and was born for the reign. But Lili'uokalani had plans that not everyone agreed with; she planned to replace a constitution adopted in 1887 that would return considerable power and authority to the monarchy and indigenous peoples. She made these plans about amending the constitution right after the passage of a tariff bill that crippled the Hawaiian sugar industry.

The consequences: economic problems and loss of power, which did not go unnoticed by the outside world. American and European politicians seriously considered overthrowing the Hawaiian monarchy. A first attempt was made by a group of American and European subjects in 1893. Thanks to the support of the U.S. government and also the U.S. Army, the overthrow of the Hawaiian monarchy was successful and Queen Lili'uokalani was forced to relinquish her authority. Thus, Lili'uokalani served as the first and last queen in the history of Hawaii.

The imprisonment of Queen Lili'uokalani after the fall of the monarchy

Lili'uokalani did not let the overthrow stand and tried to restore the Hawaiian monarchy in the following years. While implementing her plans, she lived in her private residence, was subsequently arrested there and returned to the throne room of Iolani Palace for her trial. She denied all charges of counterrevolution but was nevertheless declared guilty. A fine of $5,000 and five years of hard labour were the original sentences. However, after deliberations by the counterrevolution, it was amended and she was imprisoned in the Iolani Palace for about eight months.

The palace was used as the headquarters of the provisionally appointed government in 1893 and 1894 and it served for purposes of the Territory of Hawaii in the years from 1898 to 1959. Additionally, it served as the headquarters of the U.S. Army in times after the attack on Pearl Harbor. After those years, the palace was no longer of interest for both private and government purposes. The building fell into disrepair over the years.

It was not until 1959 that state offices were moved by the first governor of Hawaii and renovations were arranged. The palace regained its former glory, becoming a museum of Hawaii's historical events and welcoming visitors since 1978.

Since 1978 and even in today's modern age, Iolani Palace has served as a museum. It is open to the public and visitors can walk in the footsteps of Hawaiian history.

Guests enter the reception hall, the dining room and also the Great Hall on the second floor. In the Great Hall, there is an impressive staircase made from the wood of the koa tree. There are also ten portraits of Hawaiian kings to admire.

The highlight of the second floor: the throne room. The royal family used this room for diplomatic and formal affairs throughout Hawaii's history. In addition to that, this is the room where the trial of Queen Lili'uokalani was held. Visitors walk up the Koa Staircase to the second floor and marvel at the magnificent suites of the king and queen, as well as the music room and also the room where Queen Lili'uokalani was imprisoned for eight months.

One of the other highlights: access to the basement gallery. Visitors will find an exhibition of historical photographs and artefacts as well as royal Hawaiian jewels. Visitors will also be able to look at the restoration records.

Everyone may answer this question for themselves. Over the many years of historical events, the Iolani Palace was always guarded by security forces and was not left out of sight.

According to the statements of the security, every day in the early morning hours, spooky events take place at the palace. Some guards report seeing outlines of a person at the windows of the imprisoned Lili'uokalani's room, while others report hearing delicate sounds of the piano from the "Blue Room" during the morning hours.

Locals who were distant relatives to King Kalākaua or Kings Kapi'olani throughout history, report hearing voices, singing, or Hawaiian music as soon as they enter the room of the imprisoned Lili'uokalani.

In 2006, on a Sunday evening, some Hawaii vacationers participated in a guided tour. This tour took them to the monument of King Kamehameha, which is located directly across from Iolani Palace. Some of the participants said afterwards to have seen a silhouette in the window of Lili'uokalani's.

Visitors who want to get to the bottom of the mysterious happenings can visit the palace anytime in the early morning hours and see for themselves if it is illusion or reality, truth or history.

The museum offers visitors a variety of tours to immerse themselves as authentically as possible in the events of long ago. From audio tours to guided tours to tours that give access to closed-off areas or deeper insights into history. Admission prices vary depending on the tour. Children under 5 get in free (currently). Please check before you go and reserve a tour in advance.

During this tour, visitors will get deep insights into the history and former inhabitants of the palace. The tour includes all levels of the building and ends with a self-guided tour of the basement galleries.

Costs for this are:

The newest and most exclusive of the tours at Iolani Palace. The Chamberlain Tour gives visitors a glimpse behind closed doors for one hour on Thursdays and Fridays at 3:00 p.m. and opens new perspectives and backgrounds of life at Iolani Palace.

Small groups of up to four people, for example, are allowed to visit rooms such as the chamberlain's office suite in the basement. Here, visitors can experience the exciting stories of the former monarchs of the Iolani Palace. Furthermore, insight is provided into the royal library and also the palace galleries.

If you want to learn more about Hawaii's deep historical background and political connections, this is the place to be. The 45-minute special tour is limited to four participants, takes visitors through restricted areas throughout the palace and unravels the connections to the Asian nation.

Visitors get to know the historic building from a completely new perspective on a 90-minute private tour. The guest director of the Iolani Palace personally welcomes his guests before the private tour and reveals insights about happenings and numerous political and private backgrounds.

The royal library, the throne room and the royal dining room are just a few of the rooms that will be visited. The tour ends in the Palace Gallery. You can see the enchanting crown jewels and other treasures from days gone by.

Attention: Appointments for this are only available with a reservation made beforehand.

Swim shorts and beachwear are out of place here. Visitors are requested to dress moderately and appropriately. Anyone who does not comply will be denied entry.

There is nothing against recording exciting experiences of historical events. Photos, selfies, both indoors and outdoors, are allowed. However, a few guidelines and prohibitions must be observed:

For security reasons, personal items such as large bags, backpacks, or food and drinks are not allowed in the Iolani Palace.

The palace in Honolulu's downtown can be reached easily and conveniently by rental car from Waikiki via Kapiolani Boulevard. For your own journey, we have also listed below the address and the GEO data.

A few parking spaces are available on the grounds of the Iolani Palace, alternatively, surrounding parking garages can be used.

If you prefer the bus, you can take bus number 2 or 13 from Kuhio Ave + Walina Street close to the doors of the palace. The exit stop is S Hotel Street + Alakea Street.

Jessi
If you want to immerse yourself in Hawaii's history, you will find exactly what you are looking for when you visit the ʻIolani Palace. But don't forget to make a reservation in advance! You will find the appropriate email address below.
Our checklist & tips:

Hiking, whales and bodyboarding at Makapuu Beach Park Watching bodyboarders in the massive waves, lazing in the warm s...

The statue of Hawaii's most famous surfer, Duke Kahanamoku the King of the Waves, is located in the middle of Waikiki, on the famous...

A few minutes' walk from Hale'iwa Town is Ali'i Beach Park, a lawn park with narrow...

Rest and relaxation in the middle of the city - Ala Moana Beach Park. Opposite the largest shopping mall in Hawaii and di...
Menü
Oahu
Maui
Big Island,
Kauai
Molokai,
Lanai
All Hawaii Islands
Overview of all islands & background info