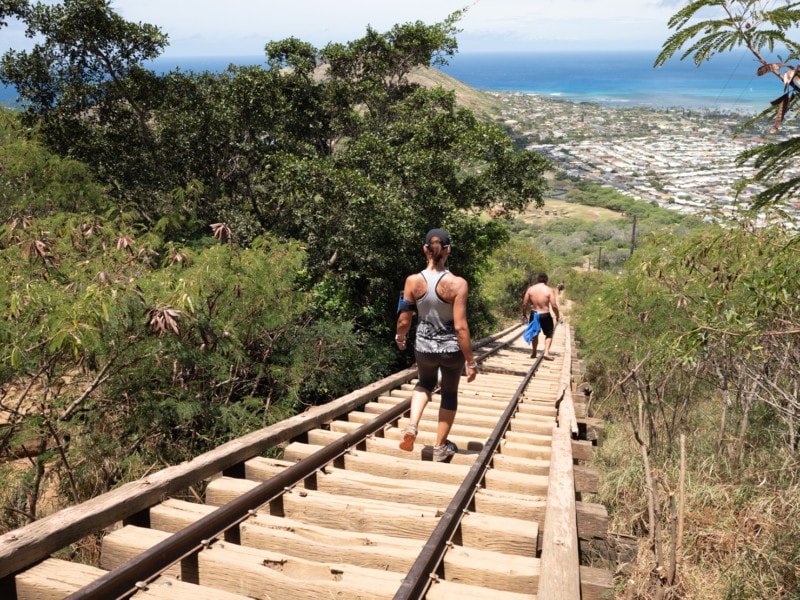 Profile of the hike

Over railroad tracks to the top of Koko Head Craters

Climbing over 1000 steps, balancing on railroad tracks of the Second World War and as a reward enjoying a breathtaking panoramic view from the top of the crater. Understandably, the hike up Koko Head Crater is one of the most popular and spectacular on the entire island.

Once used by the U.S. Army, the famous Koko Head Stairs are now climbed daily by countless visitors. Locals and sports enthusiasts alike combine the 1050 steps with daily fitness workouts, sprinting up the hulking stairs in minutes, and after a short pause, heading back down at the same pace. Travellers, on the other hand, muster strength and fitness to get a fascinating view of the interior, the Port Lock Peninsula and the Hanauma Bay Nature Reserve. On a clear day with cloudless skies, the view is breathtaking. Visitors are treated to views of verdant nature and Hawaii's shimmering turquoise coastline. Strength and endurance are two crucial points of the hike. It certainly won't be easy but the effort will be rewarded by a mesmerizing view. Don't worry, no matter what fitness level, anyone can handle the railway steps. After all, the hike is not a marathon. Everyone sets their own pace here and can decide for themselves how fast they want to walk and how many breaks are taken. Depending on how fast you go and how long you stay on the summit, it takes about one to two hours to go up and down. More interesting information about the background of the bunker and how to climb the summit can be found here in the article.

During the times of World War II, several bunkers were built in Hawaii by the US Army for military purposes. One of them is the bunker on Koko Head Crater. To provide access to the summit and to transport supplies to the top, the Koko Head Railway was built. Specifically, tracks that transported carts of supplies up and down the crater using a gasoline-powered winch. At the bottom of the volcanic crater, there used to be US Army barracks and buildings at that time. In modern times, the stairs are the main feature. After World War II, the site was claimed and used by the Hawaii Air National Guard and the Air Force. Nearly twenty years later, in 1966, the Air Force and National Guard turned the site over to the City of Honolulu. Since then, the entire site has been open to the public and known as Koko Head District Park.

Ideally, Koko Head should be climbed on a beautiful, sunny day. Not only will this provide the best view, but it is also the best weather for your safety. It is strongly discouraged to do the hike on a rainy day. Also, immediately after rainy weather, climbing the summit should not be attempted. The wooden steps are very slippery on rainy days. Even those who pay close attention and keep an eye on every step often slip away faster than expected. This is an enormous risk and an increased risk of injury.

If you climb the steps, you will surely meet one or the other local, who conquers the steps in flip-flops or slippers. But it should be remembered that locals know the trails like the back of their hand. Visitors are strongly advised to wear sturdy shoes and loose clothing. The steps are uneven, often requiring balance and a stable grip. Depending on the volume of visitors, unexpected swerving can quickly end up to the right or left of the steps. You often find yourself off the path in grass, sand or gravel sooner than expected.

For the hike to the top of the Koko Head crater, Sunday clothes should be avoided. Neither a dress nor jeans are appropriate. It will be strenuous and warm. Loose sportswear, which offers a lot of leeways, is the best option here. Especially when descending, it is not uncommon for travellers to bring their hands into play for additional support. Also, it is not uncommon to see visitors descending the steep part from the summit on all fours. Whether one would like to master this with a ladder or rather in inverted body posture, is up to everyone to decide.

The hike to the top of Koko Head Craters has only a few shady spots at the beginning and even near the summit, only a few trees provide shade. Sunscreen and a cap or hat should be brought in any case to protect yourself from the strong sun. Alternatively, the hike can be done in the early morning hours. In the times after sunrise, the heat is still bearable and the ascent is much easier than in the blazing sun. To make the hike in the morning has not only the cooler weather to the advantage but also the descent is much more pleasant at these times because it is less crowded.

Those who approach the tour from a sporting perspective usually only have a bottle of water and maybe one or two protein bars with them. Travellers often have a small backpack with them. It should contain sufficient water. Those who do not exercise regularly should carry more than one bottle of water. Usually, visitors do not spread out a picnic on the summit. Of course, those who wish can still bring snacks and eat them while enjoying the fascinating view. But remember, the more you take with you, the more weight you have to carry to the top.

The starting point and also the parking lot is located at the foot of the crater. There is an option to get there by rental car or Uber. From there, pass the baseball field and turn left onto a trail. This leads to the start of the trail without any detours. Alternatively, it is possible to get to Koko Head Crater by bus, the exit point is Hanauma Bay. To get to the trail, cross the road and take the paved trail to the left. This trail leads downhill to the same trail that is taken from the parking lot. After a few minutes, the starting point is reached here as well. As soon as the steps appear in full splendor, you should take a moment to take in what you see. A picture of 1050 steps, which lead steeply up the crater step by step.

Over railroad tracks to the summit - start of the trail

Take another deep breath and off you go. The first steps do not require much effort and are relatively easy to master. Nevertheless, the hike should be taken slowly. The steps are not steps as we know them from Germany, they are irregular, have different height profiles as well as widths and consist of different materials. Stone, wood or even bricks are supposed to represent steps as well as bridge defective sections. Step by step it goes upwards until it becomes adventurous halfway. Here you have to cross a small slope. Instead of steps, there is an old railroad track that has to be crossed. Below, the path descends a few meters to nowhere. Here we have to do a little balancing act since only every second step on the railroad track offers the safety of a wooden board under the feet. There is also no railing available. But do not worry, with a little concentration this piece is well manageable. Step by step and not too hectic. Those who are afraid of heights or simply do not dare to cross the railroad track can walk a small path to the left of the rail. This small detour leads safely to the other end without crossing the dizzying rail.

Once you have safely arrived over there, you can take a breath with a clear mind. The view, which gets better with every step, should also be marvelled at during every break. Slowly, the first steps recede into the distance, the palm trees become smaller and the higher you get, the further the fascinating view reaches. On we go. Now, the steps become more irregular, many are no longer in good condition and are bridged with piled-up stones or wooden boards. This is where the difficult part begins, the endurance wears off and the steps seem to be endlessly high as well as steep. Many people are grateful for oncoming traffic to take a short break. But even a deliberate break is no reason for a guilty conscience. Just stand to the right or left of the steps, take a big sip of water and enjoy the spectacular view. Shortly before the summit, it is most strenuous to climb the steps. The strength decreases, the thighs hurt and the sun still shines down mercilessly. Maybe 100 or 200 steps are still missing now but giving up is no longer an option. So we grit our teeth and push on. The effort pays off at the summit. Two old, dilapidated bunker buildings are still there. One or the other shady spot is also available. Before it goes the same way down, it is time to rest, drink a lot, maybe eat a snack and enjoy the breathtaking 360-degree view over Hawaii.

Tommy
Certainly, more of a workout instead of a hike and a lot is going on. Nevertheless, it simply remains a special memory for everyone who climbs the way up the old railroad tracks to enjoy the great view. For us, it is always worth a visit.
Our checklist & tips:

Dreamlike long sandy beaches, sparkling turquoise water and the backdrop of the famous Diamond Head in the background. ...

Chun's Reef is a break located approximately in the middle of the 7 miles of surf breaks on Oahu's North Shore. Its name was acquired by...

Oahu's Paradise in the East of the Island Turquoise waters and endless fine white sandy beach, which slopes gently into the sea....

On Oahu's west coast, Makaha Beach is one of the most popular, yet uncrowded beaches with great waves for su...

The multi-faceted Ehukai Beach and the famous Banzai Pipeline. In the summer months a beautiful beach, in the winter...
Menü
Oahu
Maui
Big Island,
Kauai
Molokai,
Lanai
All Hawaii Islands
Overview of all islands & background info