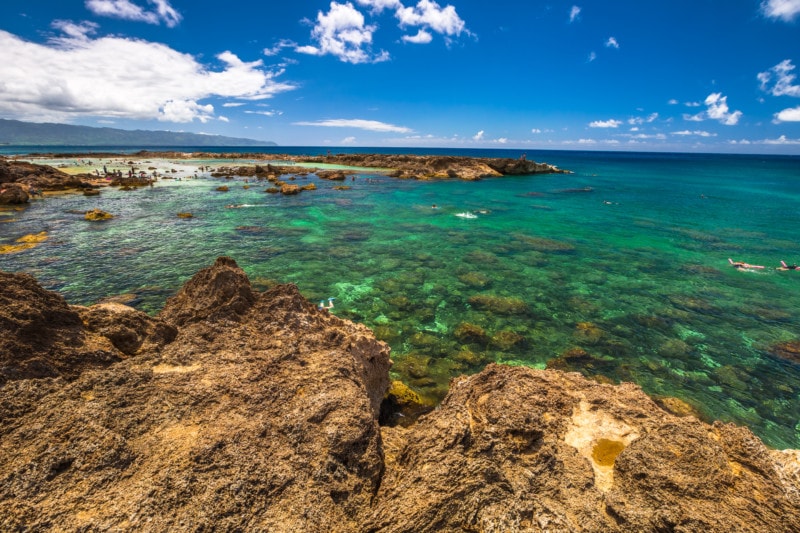 The dazzling underwater world of the famous Sharks Cove

A surfer's paradise in winter and a popular snorkelling destination in summer. Crystal clear water and a colourful underwater world with a variety of sea creatures invite visitors to explore the famous Sharks Cove on the North Shore of Oahu.

In the north of Hawaii lies a cove that few places in Hawaii can compete with. The famous Sharks Cove is equally known for surfing and snorkelling. During the summer months, the water becomes calmer and is a great place to explore the underwater world while snorkelling. Don't worry, despite the name, the chances of actually sighting a shark are very slim. There are different theories about how the name came about, some say the cove looks on aerial photos as if a shark had bitten out a piece of land, other theories say the complete shape should describe a shark. Everyone may decide for themselves what the truth is.

During snorkelling in the summer months, visitors are fascinated by the colourful underwater spectacle and the visibility is amazing except on rainy days. Corals are seldom but rock formations and ledges are abundant. Reason enough for countless schools of fish to cavort in Sharks Cove. Here you will find all colours, such as blue and yellow surgeonfish or colourful parrotfish. Moray eels and green sea turtles also cross the paths of adventurous snorkelers. Special attention should be paid to sea urchins, which sit in all the small holes in the rocks. At the edge of the bay, the water depth is two to four meters deep and inside the bay, it is four to six meters deep.

Once the summer months are over, Sharks Cove turns into a paradise for surfers who plunge into the gigantic waves and conquer them. In general, snorkelling is still possible then, but due to the strong swell, it is much more dangerous and not advisable. The waves have enormous power and throw you quickly onto the rock formations or the reef. This does not stop risk-taking surfers from throwing themselves into the gigantic waves. Those who come to snorkel should rather postpone this to another day in case of bad conditions for the sake of safety.

Good to know, information for visitors

Visitors here have the option of using washrooms with showers and toilets. A picnic area with benches and a barbeque is not given here. Nevertheless, you can quickly grab one or two delicacies at the snack bars or restaurants nearby.

Since there are no lifeguards on site at Sharks Cove, visitors should take care of themselves and others both in the water and on the beach.

The easiest way to get to the North Shore is by car. It is about an hour's drive from Waikiki. Always follow the signs to Haleiwa/North Shore on the highway and from Haleiwa keep east. After a short while, there are already signs about the famous Sharks Cove and it doesn't take long to reach the associated parking lot. Since only a few parking spaces are provided, you should be there early to get one.

Those who do not have a car can resort to the public bus, but this requires a large time investment of over two hours each way.

Tommy
One of the most beautiful snorkelling spots on the island and is absolutely recommended. Unfortunately, no longer an insider tip. Being there early is worth it.
Our checklist & tips:

Surfing, snorkeling and lazing on Sunset Beach A breathtaking beach of Oahu, a paradise for surfers in winter and...

Dreamlike long sandy beaches, sparkling turquoise water and the backdrop of the famous Diamond Head in the background. ...

This beach, similar to Lanikai Beach, fascinates with the snow-white and fine sand and the bright blue color...

Nānākuli Beach is one of the top beaches on the west coast of Oahu. The sea is turquoise blue and crystal clear, the sand soft and...
Menü
Oahu
Maui
Big Island,
Kauai
Molokai,
Lanai
All Hawaii Islands
Overview of all islands & background info