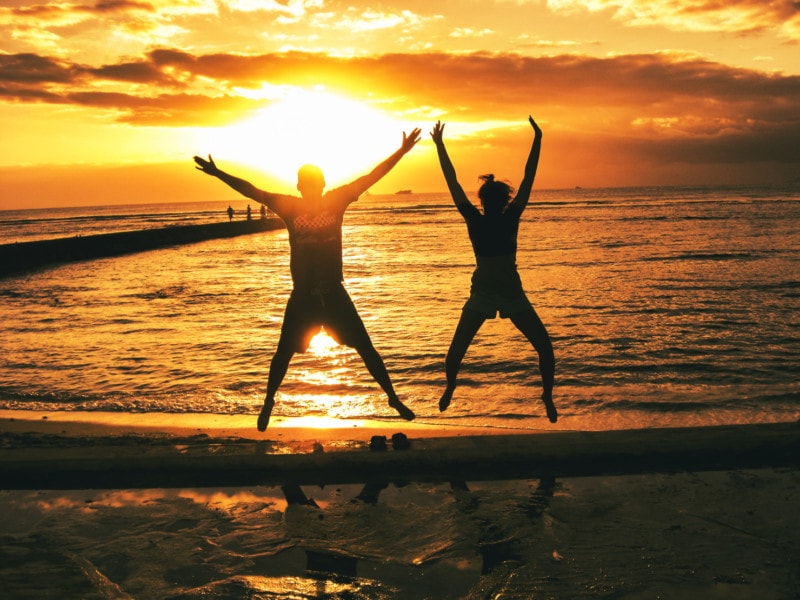 Gorgeous long sandy beaches, sparkling turquoise waters and the backdrop of the famous Diamond Head in the background. Equally influenced by Hawaiian royalty and tourists from all over the world, Waikiki Beach in Oahu is one of the most beautiful destinations in the world.

Originally a retreat for former Hawaiian royalty and monarchs, the popular Waikiki beach on the South Shore is now literally a paradise for young and old alike. Soft white sand, an endlessly long boardwalk, numerous small boutiques, restaurants and beach bars overlooking the turquoise sea invite visitors to throw everyday worries overboard. Waikiki Beach has become known primarily as a surfer's paradise. Even the monarchs met there in the 19th century to unwind and ride the waves. Duke Kahanamoku, a Hawaiian water sportsman and multiple Olympic champions, was also an important personality who advanced water sports in Hawaii. In honour of the Duke, the Duke Kahanamoku statue, Waikiki's landmark, stands on Waikiki Beach.

In 1901, the Moana Surfrider, the first hotel on Waikiki Beach, opened its doors. This was the starting signal for the world-famous beach on the South Shore. Today, Waikiki Beach is home to countless accommodations for all price ranges. From 5-star hotels or resorts to shared rooms for backpackers, visitors are offered everything. Many surfers teach vacationers how to surf and impress with their ability to ride the waves. But there's no need to panic, those who aren't surfer types still have countless ways to enjoy Waikiki's beautiful beach. For example, travellers can let off steam playing beach volleyball, try their skills at canoeing or jump into the cool turquoise waters in secluded areas without waves.

The history of Waikiki Beach

Before Waikiki Beach became famous and popular with travellers from all over the world, Hawaiian monarchs and kings visited its stunning beaches. In the earlier years, the Waikiki Beach area consisted mostly of swampland. Fish ponds and wet marshes were located next to the breathtaking beaches instead of hotel complexes and resorts and the Manoa and Palolo parts were still part of Waikiki as well. It all started with the Hawaiian King Kamehameha. He was Hawaii's first king, considered generous and honoured by his people. In 1450, the government centre of Oahu was located in Waikiki. Reason enough for King Kamehameha to settle in Waikiki Beac but not to enjoy the beauty of the land.

Instead, he had the intention to conquer Oahu with his fleet and ultimately unite the islands of Hawaii. Until the year 1830, aristocrats came to Waikiki again and again to enjoy the beach for themselves and to test their skills on the longboard. In the years that followed, visitors who were not of aristocratic descent flocked to the beach for the first time. Quickly, the beauty of the palm-lined beach spread and more and more travellers wanted to see the gorgeous beaches with their own eyes. The opening of the Moana Surfrider in 1901 was an important step for tourism on the beach. Even more crucial was the opening of Honolulu Airport in 1927, which opened the doors to international tourism.

The beach sections of the Waikiki Beach

Waikiki is not called the Manhattan of the Pacific for nothing and there are several reasons why the beach is famous worldwide. The beaches of Waikiki have everything to offer what the heart desires. Another advantage is that they are all free to visitors. Whether cultural and historic, romantic and secluded or action-packed and crowded, each of Waikiki's eight beach sections offers vacationers a distinct atmosphere with the unique backdrop of Diamond Head in the background. The eight sections were created by natural eruptions and are named the following:

Some people claim that such a dreamlike beach with the perfect backdrop of Diamond Head cannot be natural. But don't worry, the paradise in the Pacific Ocean was created purely from nature, except for human mistakes. Human errors mean, among other things, not paying attention to erosion, which has existed since the 19th century. Bungalows and vacation homes built too close to the beach, for example, cause problems due to erosion. As a result, sand had to be imported from California as early as 1920 and 1930. The import was stopped, however, because engineers realized that local sand was best suited for integration. Thus, instead of importing sand from California, it was decided that sand from other Hawaiian beaches, such as Waimea Bay Beach or North Shore beaches, would be preferred.

Aside from these and similar problems, Waikiki's mile-long beach is completely natural. Understandably, visitors love the beach for that very reason. Waikiki's dazzling underwater world is equally as natural. Besides the world-famous Hanauma Bay, visitors also get to see the many colourful fish and corals on the beach in Waikiki. With a little luck, sea turtles will also show up. But beware, visitors should keep an eye out for jellyfish. If these are sighted, a warning is also issued by the lifeguards. Watching out for them yourself is also recommended.

For Duke, it all started on the beach in Waikiki. The native Hawaiian moved to Waikiki with his family when he was 3 years old and learned how to surf on traditional Hawaiian surfboards. Besides surfing, swimming was the Hawaiian's great passion and in 1911 Duke had his first breakthrough in freestyle swimming. He went on to compete in 5 Olympic Games and was ultimately a 5-time Olympic champion. During his travels for Olympic participation, he introduced surfing to the rest of the world. He taught it to friends in Hollywood and taught locals as well as visitors on beaches in Hawaii and California.

Without Duke Kahanamoku, modern surfing might never have become popular and thus Waikiki Beach would never have become as famous. Duke was the first person to be inducted into the Hall of Fame with his talent in both surfing and swimming. In order not to let this great Olympic champion be forgotten, the Duke Kahanamoku statue was built at Waikiki Beach in his honour.

Sunsets are plentiful in Hawaii, yet travellers should not take the breathtaking natural spectacle for granted. Waikiki's long sandy beach faces completely south, making it the perfect location for beautiful sunsets. Whether from a beach bar, pool bar or simply from a blanket on the beach, a beautiful spectacle is offered daily. Visitors can marvel anew each day as the glowing sun bathes the sky and sea in orange-red colours and the sailboats in black silhouettes. The sunsets in Waikiki are as famous as the beaches themselves. Not many places in the world have more colourful sunsets to marvel at.

Interesting facts and good to know

Sharks on the beach in Waikiki

Another positive reason and certainly one of the factors why Waikiki Beach is world famous and popular, there has not been a single shark attack in over 150 years of tourism at Waikiki Beach. This does not immediately mean that there are no sharks in the Pacific Ocean around Hawaii, yet this fact should take away feelings of fear from vacationers. Lifeguards and beach attendants are also on the lookout for sharks throughout the day and ring the alarm immediately if there is any danger in sight.

Eating and drinking at the beach in Waikiki

If you take a stroll along the beach in Waikiki, you will always encounter vacationers sipping a cocktail from a pineapple or spooning rainbow-coloured ice cream. Numerous beach bars on the beach in Waikiki invite visitors to enjoy the Hawaiian atmosphere. Attention: Alcohol is prohibited on the beach in Hawaii, as in California, and is punishable with fines.

Along the beach, there are regular cultural festivals, which are also popular with travellers. The Waikiki Historic Trail is also a popular route among visitors. The trail winds along the beach of Waikiki and tells the historical story of Waikiki with the help of surfboards with information.

Like most popular places, finding parking is not easy at Waikiki beach. Parking on the street here is prohibited or subject to charges. Nevertheless, there are solutions. At the zoo, which is located directly at the beach or also on Monsarrat Avenue in Kapiolani Regional Park, there are enough free parking spaces available.

Waikiki Beach is open 24 hours. Visitors who are still on site after dark or who want to admire the stars from the beach will most likely be approached by the local police. On the beach of Waikiki, there is a ban on staying overnight, which is taken very strictly and is to be prevented with strict controls.

Malia
Waikiki Beach is already quite crowded but for kids, it is great and harmless fun in the waves!

Jessi
Perfect for strolling and spending time on the beach.
Our checklist & tips:

Hiking, whales and bodyboarding at Makapuu Beach Park Watching bodyboarders in the massive waves, lazing in the warm s...

The statue of Hawaii's most famous surfer, Duke Kahanamoku the King of the Waves, is located in the middle of Waikiki, on the famous...
Menü
Oahu
Maui
Big Island,
Kauai
Molokai,
Lanai
All Hawaii Islands
Overview of all islands & background info