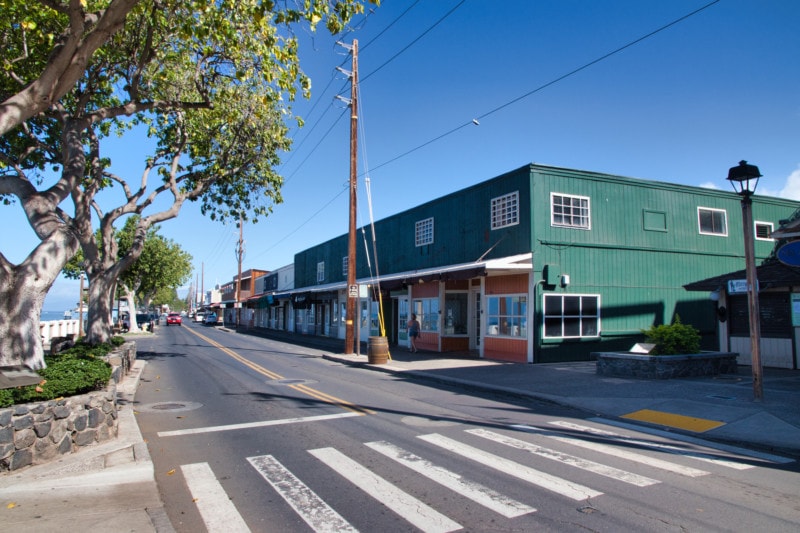 If you're in the mood for history, culture or just some urban flair, you can plan a half day in Lahaina, an interesting historic town at the foot of the West Maui Mountains. In the days of whaling, all hell broke loose here. Even today, Lahaina is a bustling city with a population of about 11,700. However, the hustle and bustle in the streets and along the harbor is no longer caused by drunken sailors, but by the many tourists. Economically and administratively, Kahului and Wailuku are more important, but Lahaina is culturally the most important city in Maui and an American National Historic Landmark.
Many come for that. Many also to store in the famous Front Street. Cruise ships dock here and also many tours (to Lanai, Molokai or whale watching) start from Lahaina.

Good to know
Lahaina was once the capital of the Kingdom of Hawaii. Since 1846, the Honolulu.

Hermann Melville spent a few months in Lahaina in 1843. What he experienced here was incorporated into his novel "Moby Dick.

Not all houses here are from the pioneer era, they just look like they were hatched from the 19th century. New buildings are obliged to give themselves an old-looking "mask".

In Lahaina it is often hot and dry. In the West Maui Mountains, which are not far away, it rains frequently. That is why not infrequently a magnificent rainbow rises above the city.

Banyan Court Park
The name of this park comes from the fact that the largest banyan tree in Hawaii is located here. At first glance, it may look like you're in a small forest. But no: everything that grows here over an area of almost 3,000 square meters is a single tree.
Banyan is a species of fig that spreads to other trees until its aerial roots reach the earth, the banyan grows stronger and its host tree cannot survive under the load. Its proportions here in Lahaina are mighty.
There is always something going on around and under the Banyan Tree. Markets and cultural events take place here and people relax in its soothing shade from the "merciless sun" (that's what Lahaina means, after all).
Towards the harbor stands the Old Lahaina Court House. The courthouse was built in 1859. Conveniently, at that time the building housed not only the court, but also a jail. Today it houses a visitor center, the Lahaina Heritage Museum and two galleries of the Lahaina Arts Society.
Directly behind the Banyan Tree is the harbor. The Pioneer Inn on Wharf Street is the oldest hotel on the island.

Highlights on Front Street
Cafés, bars, stores, galleries - along Front Street, visitors bustle about. They are looking for postcards or paintings, jewelry, a delicious lunch or simply a bottle of water.

At the corner of Front Street and Dickons Street, in the middle of a lush green park, stands the Baldwin House. Dwight Baldwin lived in this house built in 1834, he was a well-known natural scientist and Protestant missionary. It is interesting to visit (the entrance fee is only 3 $) this building, because it also offers insight into the history of missionary work in Hawaii.

Among galleries and clothing stores, another building stands out: at 858 Front Street is the Wo Hing Temple, a temple built by Chinese in 1912 that is now a museum of Chinese culture and history in Hawaii. By the way, the ticket to Baldwin House is also valid here. At the end of Front Street is a Japanese Buddhist temple.
By the way, these and other cultural and historical sights are summarized in the so-called Lahaina Historical Trail. More than 60 sites can be visited and explored on your own. The tour takes about an hour. The city guide is available at the visitor center in the Courthouse at the Banyan tree.

Directions and parking
Lahaina is located on Highway 30, a very well developed road. From Kahului it is less than 25 miles to Lahaina, for the way you should plan about three quarters of an hour by car. Public buses (the Lahaina Islander) also drive this route.
Highway 3000 is a bypass road. It leads around Lahaina to merge back into Highway 30 north of the town. Despite the bypass, however, there can be heavy car traffic in Lahaina at rush hour, as many explore Frontstreet from their rental cars.
Free (and much sought-after) parking is available, for example, at the corner of Front Street and Prison Street. At the shopping center "Outlets of Maui" there are more, albeit paid, parking spaces.

Around Lahaina
If you want to combine the trip to Lahaina with a day at the beach, you can do that at Ka'anapali Beach or Baby Beach.
But Lahaina can also be combined well with a day trip on and around Highway 30. Along the spectacular coastline there are beautiful bays, great viewpoints and good little hikes, for example to the famous Nakalele Blowhole.

Tommy
A stroll along Lahaina Front Street takes you past both historic and modern buildings. Besides a lot of souvenirs, there are also handicrafts, clothing, paintings and jewelry to admire. A shopping spree is worthwhile.
Our checklist & tips:

How did you like Lahaina Front Street & Banyan Court Park?

Also known as the "Keoneheehee Trail," this trail leads up to the valley floor of Haleakala Crater on Maui, the penultimate...

If you drive south from Paia and turn into Alawai Road, after a short time you will arrive at a long white beach.

Somewhat hidden in the higher region of Kula, is this privately owned garden. It is a true oasis...

A beach paradise out of a picture book - Maui's Big Beach Golden sandy beach, breathtaking lava cliffs in the background...