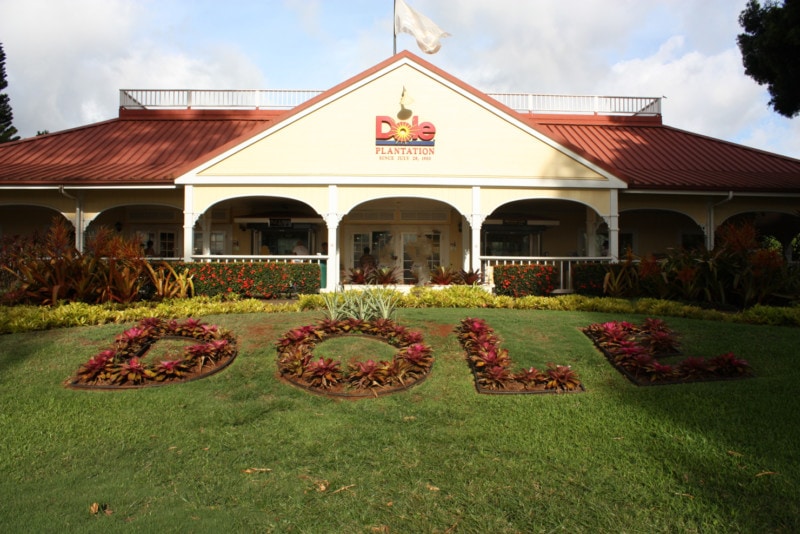 Halakahiki, the tropical sweet fruit of Hawaii. Many hundreds of years ago, the globally popular pineapple came to Europe through Christopher Columbus and over time, dole plantations were developed in various places around the world, which not only grow pineapples. Visitors are introduced to the cultivation, growth and harvesting of bananas, hibiscus and coffee, for example.

Starting as a roadside fruit stand, the Dole Plantation in Wahiawa has evolved into a popular tourist destination and pineapples have become Hawaii's signature fruit. The plantation offers visitors young and old insights into the various growing processes of the spiky tropical fruit. There is an opportunity to take a tour of the plantation on one of the four trains and marvel at the planting, growth and also the harvest with your own eyes. The Pineapple Garden Maze is an adventure of a different kind. In the middle of the plantation is a twisted paradise. A maze, which in 2008 was included in the Guinness Book of Records as the largest maze in the world. Those who dare to enter must find and document stations laid out in the maze. But Dole Plantations grows much more than pineapples. In the Plantation Garden, visitors can stroll through eight gardens and marvel at the cultivation of a variety of other exotic plants and well-known delicacies, including flowers such as hibiscus, cocoa fruit and coffee.

The history of the pineapple and the Dole plantation

The first records of the exotic fruit can be traced back to 1439. There is evidence that Christopher Columbus tasted the tropical fruit at Guadalupe. No one can say exactly when the first pineapple was associated with Hawaii. What can be traced, however, an advisor to King Kamehameha the Great successfully cultivated pineapples. The original development of the pineapple industry in Hawaii is said to be a sailor named John Kidwell. He is said to have brought the exotic fruit to Hawaii in the early 19th century to test the harvest potential in the soil.

The Dole Food Company developed several years later in 1901, founded by James Drummond Dole, who in subsequent years joined forces with Castle & Cook and the Standard Fruit Company with Honduran roots. The Dole Plantation, as it is known in Hawaii today, has been around since 1950. Between the North Short and Honolulu, it all once started with a roadside pineapple stand and over the years has evolved into an educational and globally popular destination for visitors. In today's age, the Dole Plantation is run by over one million visitors per year explored. Contrary to what some might think, the plantation is not only visited by travelers, also Kama'aina as the inhabitants of Hawaii are called, are regular guests.

Dole Plantation - educational, informative and fun for young and old.

Visitors to the plantation are offered many different ways to explore the extensive grounds and the cultivation of the various exotic plants. In addition to information boards and presentations, various tours are offered to help guests understand the process of cultivation, growth and harvesting. Especially popular, exploring the prickly sweet pineapple during a ride on the Pineapple Express. The Pineapple Garden Maze and the Plantation Garden Tour are also popular activities. Of course, fresh pineapple from the own harvest or other dishes, such as the famous DoleWhip be acquired.

By train through the Dole Empire

A train ride through James Dole's Dole Plantation. Visitors get a taste of the Dole Plantation during a 20 minute train ride through the breathtaking landscape of Hawaii, the background to the founding, the history and also the agricultural aspects for the cultivation of the exotic fruits are brought closer. Those who decide to take the train ride, which is about 3 kilometers long, have the choice between four trains.

Originally designed by S. Lamb in England, the train has been traveling through Hawaii's pineapple plantations at Dole Plantation for several years. The Pineapple Express flashes yellow as well as red colors and resembles an 1870s-style steam locomotive in appearance. Powered by a hydraulic pump and a diesel engine, the train has a total of 4 open carriages, which allow visitors to look in all directions.

In bright red drives the Lady Liberty steam locomotive its visitors through the fascinating landscape of Hawaii on the Dole Plantation since 2003. Originally, the locomotive was designed and built in 1883 by Mason Machine Works in Massachusetts. The Lady Liberty train is one of the special models, which in the early 19th century was known for abilities such as driving sharp curves or 3-rail driving up and down grades. Trains of this type were used, for example, in the entire American area for work in mining.

Visitors can on your own stroll through the eight different gardens of the Dole Empire and find a thriving ecosystem. There are plenty of opportunities to get a close-up look at the exotic tropical plants. The colorful blossoms of Hibiscus or lavender almost stand out. On the one hand with their strong color gradients, but also the delicate smell of the flowers is in the air. In addition to exotic plants, delicacies such as cocoa or coffee and exotic fruits can be discovered in their natural environment and interesting facts about the growth process can be learned.

Known worldwide made by the entry in the Guinness Book of Records published in 2008, the Pineapple Garden Maze of Dole Plantation an adventure for young and old. Covering an area of over 3 hectares, more than 3 kilometers of enchanted paths and dead ends wind their way to the heart of the labyrinth. In total, the riesy labyrinth from more than 14000 different known as well as exotic plants. Visitors can meander through the beautifully designed corridors on their own and conquer the botanical maze. In the breathtaking flora of the maze, visitors have to find eight secret stations and make corresponding notes. Those who wish can record their notes traditionally with pen and paper or use the specially developed Dole Plantation app.

But what is actually behind it? What makes the pineapple so special?

Full of vitamin C and fiber, pineapple is one of the most popular exotic fruits among the population and worldwide. The pineapple belongs to the Bromeliaciae family, are sweet as well as tropical in taste and are consumed in many different ways.

An unknown, yet interesting point, each of the round eyes that make up the pineapple is originally a small fruit of its own. During the ripening process, these individual eyes grow together with other eyes and form a complete pineapple.

Dole pineapple is harvested exclusively when the fruit is ripe. Pineapple does not ripen after harvest and would not be ready for consumption if harvested prematurely. Due to the special ripening process, which occurs from the bottom up, the fruits are much sweeter at the bottom than at the crown. After cutting, the exotic fruit keeps only 2 to 4 days in refrigerated conditions.

Living and working on Dole Plantations

Whether planting, fertilizing or harvesting, there is work around the clock on plantations. In the peak pineapple season, plantation workers are lined up six days a week up before sunrise to be driven to the plantations around 4:30 am. All necessary work here is done by hand and involves elaborate processes. A single plantation worker can plant over 10,000 pineapples in one working day. Only about 12 hours later, around 16:30, is the end of work in sight and the workers are driven back to the so-called plantation warehouse. The plantation camp is also where the workers live, and they are separated by nationality and housed in different houses. The separation and housing by nationality creates a sense of cohesion and strengthens community life. You can think of it as many small villages. Families develop, activities are carried out together and festivals are celebrated. For example, the Chinese helpers celebrate Chinese New Year quite traditionally, including fireworks, while other nationalities have holidays for national heroes.

Tommy
The plantation does not have to be. But if you should include the plantation in your vacation planning as a tour stop, then definitely try the pineapple ice cream :) And don't forget the fish pond. There's about as much fish going around as there are tourists swarming the grounds ;) Interesting, especially with children, it can be nevertheless and can be connected great with Haleiwa. (Coming from Honolulu)
Our checklist & tips:

A man-made peninsula at the foot of Ala Moana Beach Park offers safe and quiet especially for the little ones....

On the trail of Hawaii's past Once the official residence of Hawaii's monarch, the royal pa...

On Oahu's west coast, Makaha Beach is one of the most popular, yet uncrowded beaches with great waves for su...

The statue of Hawaii's most famous surfer, Duke Kahanamoku the King of the Waves, is located in the middle of Waikiki, on the famous...

Located only about 400 meters from the coast of Kailua Beach, this tiny island, also known as Flat Island, is a...
Menü
Oahu
Maui
Big Island,
Kauai
Molokai,
Lanai
All Hawaii Islands
Overview of all islands & background info