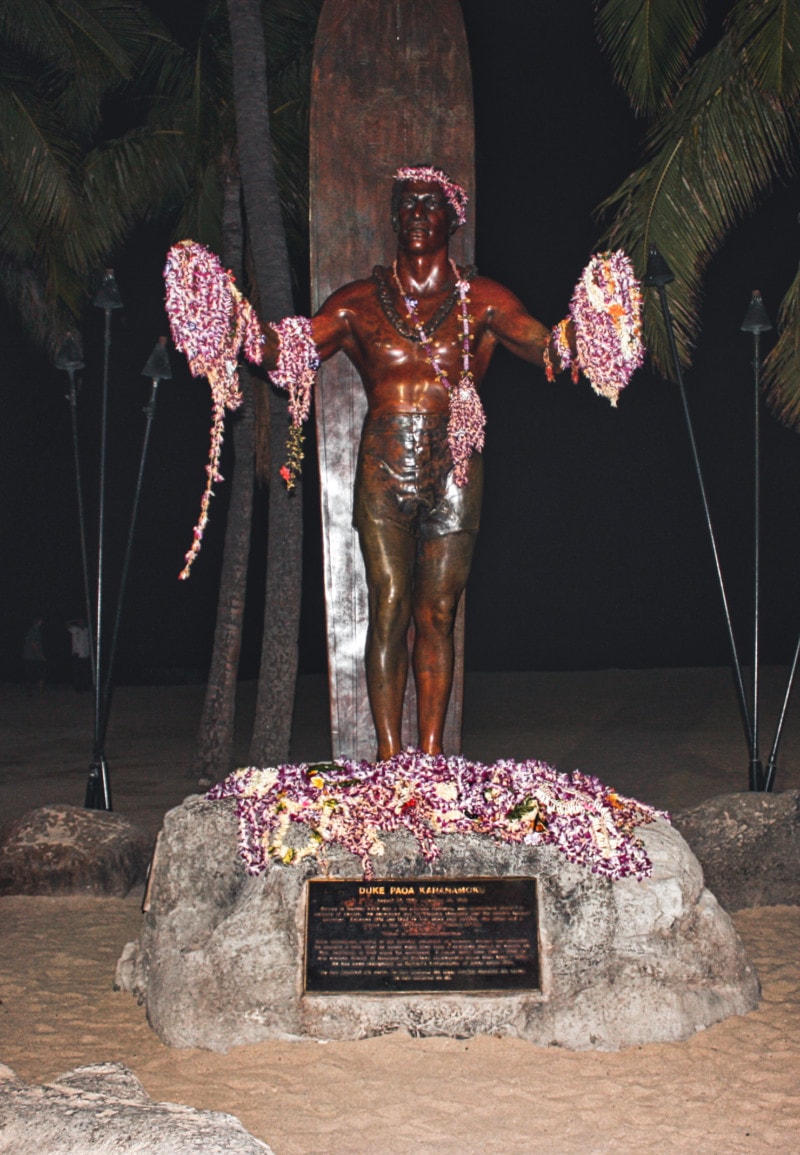 The statue of Hawaii's most famous surfer, Duke Kahanamoku the King of the Waves, is located in the middle of Waikiki, on the famous Waikiki Beach. Since we find that such a statue says little without background information on the person living at the time, we have summarized the most important information about his lifetime for you. With these, the statue looks more impressive and gives the necessary humility for this exceptional athlete.

The Hawaiian legend Duke Kahanamoku enchanted the world with his deeds, lived the 'Aloha', is considered the father of modern surfing and is a multiple Olympic champion in swimming. In his honour, a bronze statue was built on Waikiki Beach, which welcomes visitors to the beach.

Duke Kahanamoku was born in Honolulu and moved to Waikiki with his family at the age of 3. Kahanamoku got the nicknames "The Duke" and "The Big Kahuna" over the years and is still considered the father of modern surfing. At the time, Duke's family home was located in the area of what is now the Hilton Hawaiian Village Waikiki Beach Resort just minutes from the beach. Surfing and swimming were his two great passions. He performed both sports from a young age and quickly qualified for competitions, especially in swimming. Duke Kahanamoku not only introduced surfing to society during his life but also won several Olympic medals in swimming. He was the first person in history to be inducted into the Hall of Fame for his talent in both surfing and swimming.

In the course of his career, he carried the Aloha Spirit out into the world and showed himself in important roles in politics, the film industry or even as a businessman. He became sheriff in Waikiki and still acts as a respected leader for the surfer boys on the beach in Waikiki. The city of Honolulu also does not let deceased legends be forgotten. In his honour, Honolulu had a bronze statue of the Hawaiian hero made, which welcomes visitors to the beach in Waikiki with open arms.

Family and childhood of Duke Kahanamoku

Duke Paoa Kahinu Mokoe Hulikohola Kahanamoku, as he was known by his full name, was born in Honolulu on August 24th, 1890 and he grew up in a family with a total of nine children. He had three sisters and five brothers. The family was not of noble lineage, but nevertheless enjoyed good standing among the Hawaiian people. Duke's mother was a religious woman, and his father worked as a policeman. Even as a child, the young Duke impressed with his swimming abilities. He explored the various underwater areas of the island and participated in competitions, which he won successfully. Nevertheless, he enjoyed the usual Hawaiian school education. As a child, he finished elementary school in Honolulu, then entered Kamehameha School, but never graduated due to the high cost. In order to pay bills, support his family and be able to afford little things in everyday life, he worked as a shoe polisher, newspaper vendor and ice cream vendor, among other things. It was not until the age of 21 that he made his breakthrough with his talent in swimming. All these events are part of the great career of the Hawaiian legend.

Towards the end of the 19th century, surfing on the islands of Hawaii was almost completely disregarded. It was more or less an extinct activity and only a few locals enjoyed riding the waves every day. Duke was one of the few who plunged into the waves every day. He practised swimming and continued to build his skills. In addition to his passion for surfing, Duke achieved a breakthrough with his swimming achievements at the age of 21. He set a new world record in the 100-yard freestyle swim, beating the former world record holder by 4.6 seconds. This victory was not recognized for a long time because according to the referee, the stopped time was not correct and was stopped incorrectly. Only one year later, however, Duke proved his skills again and created history for Hawaii.

He participated in the Stockholm Olympics, winning a gold medal in the 100-meter freestyle swim and a silver medal in the 4×200 relay. Thus, the breakthrough was finally made and Hawaii had a hero to celebrate.

This was reason enough for Duke to travel the world. During his travels, he taught his unique surf-derived Kahanamoku Kick swimming technique and taught friends and travellers how to surf. In addition to friends from Hollywood with whom he surfed at the beach in California, he also taught celebrities who travelled to Hawaii. This was a crucial point and the boom of tourism in Waikiki.

Duke managed to change a country permanently and forever during his travels. In 1914, the Hawaiian was the star in Australia. Here, in December, the first surfing exhibition took place at Freshwater Beach in Sydney, and this is where Duke's original surfboard is still kept and treasured today.

Unlike some people, Duke did not distance himself from things that frightened him. So it happened that in 1917 he threw himself into waves that were much larger than usual. He became a worldwide legend when he surfed almost a mile on a wave about 10 meters high off Hawaii.

During his travels, the Hawaiian pursued both of his talents and never lost sight of his passion for swimming. He regularly won medals at the Olympic Games, for example in Antwerp/Belgium in 1920 or in Paris/France in 1924. During these successes, surfing developed into an international water sport in society and became popular worldwide. Because of his talents in both water sports, Duke was the first personality to be inducted into the Hall of Fame for talents in both swimming and surfing.

Duke Kahanamoku - His life apart from surfing and Olympic victories

Becoming known worldwide through his masterful swimming and surfing successes, Duke opened many other doors. Between the ages of 30 and 40, he appeared in 28 Hollywood films. He met his future wife Nadine Alexander from Ohio in 1940 in the USA and married her at the age of 50. It was a childless, but still glamorous marriage. In 1952, Duke took a position as a lifeguard. The right choice as it would turn out. He saved the lives of eight sailors in Corona Del Mar on Newport Beach in California during a shipwreck that occurred on rough seas in high swells. He paddled his surfboard back and forth several times between the beach and the scene of the accident, and the police chief of the region at the time described his actions as a supernatural rescue operation with the surfboard.

Duke was a very diverse personality. He was employed as Sheriff of Honolulu from 1932 to 1961 after his heroic successes in surfing and swimming and he also left his footprints in Hawaiian politics. He became an official ambassador in 1959 with Hawaii's designation as the 50th state of the United States.

Duke lived a life full of 'Aloha' and died on the 22nd of January, 1968 at the age of 77. It was a great loss to the Hawaiian people. Duke's ashes were thrown into the waves of Waikiki and to keep Hawaii's hero from being forgotten, a bronze statue was built in his honour. With open arms, the statue welcomes visitors to Kuhio Beach in Waikiki and commemorates the great achievements of Duke Kahanamoku. In his honour, there is also the Duke Kahanamoku Lagoon, built in the 1950s. An artificial, beautifully landscaped lagoon, which is located on the grounds of the Hilton Hotel directly by the ocean at Waikiki Beach. The lagoon is open to all visitors and can be used free of charge.

Who would have thought that?

More heroes of surfing from Hawaii

Duke Kahanamoku was a hero of his time and is still a role model in many areas. But over the years there were other surfers who were always looking for the perfect wave and still are.

Jessi
If you are in Waikiki anyway, a photo with Duke or his statue is a welcome image in the Hawaii photo album. From time to time, however, it is a bit busier and you have to be patient until it is your turn. But the beach is like a "waiting room" which gives you time to visit our website again to read about Duke's historical milestones ;-)

Tommy
TouriSpot: Yes! Crowded: Yes! A photo with the legend (or the statue): A must be nevertheless! ;-)
Our checklist & tips:

A dazzling underwater world, fine white sandy beach and the best snorkeling spot of the whole island will make you vers...

The multi-faceted Ehukai Beach and the famous Banzai Pipeline. In the summer months a beautiful beach, in the winter...

The Ka'au Crater Trail is about 8 kilometers long hiking trail with 560 meters of altitude. It doesn't sound too strenuous...