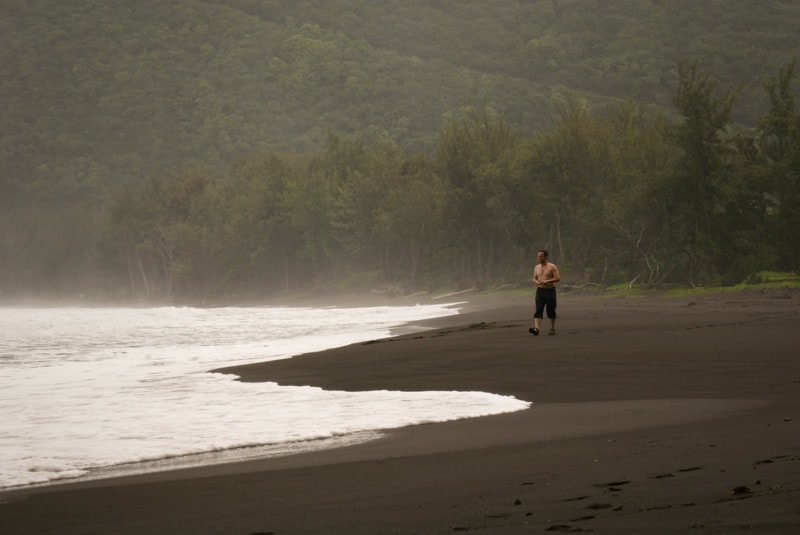 Waipio Valley is a significant place for the Hawaiian people. The valley has been inhabited for over 1,000 years and plays a major role in Hawaiian mythology. Even Wakea, the creator of the islands, had a fondness for this region. According to history, the Hawaiian demigod Maui met his end here in the valley when he tried to steal fried bananas. Around the turn of the century, Chinese and Japanese settled in the valley to grow the crop taro and rice. With the onset of World War 2, many left the valley to live in Hawaii, which had become more modern, and in 1946 a 17-meter tsunami wave almost destroyed the entire valley. As a result, most people left Waipio Valley. Today, about 40 Hawaiian hippies still live here beyond civilization among taro fields, waterfalls and creeks. Hiilawe Falls, the largest waterfall on the Big Island, cascades nearly 400 meters in the Waipio backcountry. As far as I know, there is no official path to get there without walking through private land. The fertile valley with a width of 1.6 km and a depth of 8.1 km is surrounded by 800 m high cliffs. Waipiʻo means in the Hawaiian language curved water.

You can overlook the valley from the coastal Waipio Valley Overlook at the end of the Hamakua Heritage Corridor. Coming from Kailua-Kona, Highway 19 runs along the Mauna Kea north slope through wide sugar cane fields. Once you pass the town of Waimea, you reach a turnoff in the town of Honokaa on the left that leads to Waipio Valley - Highway 240.
Honokaa is a town of about 2,200 people and was one of the largest towns in Hawaii in the early 20th century, the center of sugar cane and cattle ranching. However, the largest plantation, Hamakua Sugar Co. closed down in 1994. Today, sugar cane only grows wild here and the area is surrounded by huge macadamia nut tree plantations, giving Honokaa the nickname Macadamia Nut Capitol of the World brought in.
Highway 240 is a one-way road, so you have to drive the same way back to Honokaa. So you can't miss the big lava tunnel, which is on the left side on the way there. However, you can't go in without the necessary equipment.

There is a small trail from the lookout down into the valley, and on the opposite cliff you can see a steep trail that winds up in switchbacks, taking you several miles into the neighboring Waimanu Valley.

The road leading down from the Lookout into the valley is steep, narrow, and only accessible by off-road vehicles. 25% slopes want to be mastered. However, organized descents are offered almost every hour, with all-terrain vehicles or with carts pulled by mules. Or you can explore the valley on foot. Below, a lonely black sand beach, lush jungle and wild horses await. The surf here can be very dangerous. So you should only swim on calm days. The "Private Property" signs of the few inhabitants should be taken seriously if you want to hike further into the valley. In the Waipio Valley parts of Kevin Costner's movie Waterworld shot, it now belongs to 60% the Bishop Museum of Honolulu.

Florian
Waipio Valley is probably one of the most beautiful and lush valleys in the Hawaiian Islands. It is so beautifully pristine and deserted that I have visited it several times. Visiting the valley only from the lookout at the top of the road is nice, but you miss wild Hawaiian beauty if you don't venture the short but very steep way down. With a normal car you have no chance here and especially no insurance coverage. On foot is the best and cheapest choice! To get to the black sand beach, you may have to cross the Waipio creek, which flows into the sea and can have a strong current after rains. Hiking poles may help here.
Our checklist & tips:

In the Puna District on Big Island, in the Pohoiki Bay, lies the Isaac Hale Beach Park. It is known for its strong ...

A small bay south of Kona, which is just for snorkeling and by its so colorful underwater world a popular...

Opinions differ about this hiking trail. Is it okay to walk it or not? In the "Ultimate Guidebook of Big Isla...

In the "City of Refuge," as the Hawaiian tongue twister is also known, visitors will find one of the most authentically...

At a distance of about 5 km from Hilo airport, you would hardly expect such a wonderful place. The bathing p...
Menü
Oahu
Maui
Big Island,
Kauai
Molokai,
Lanai
All Hawaii Islands
Overview of all islands & background info