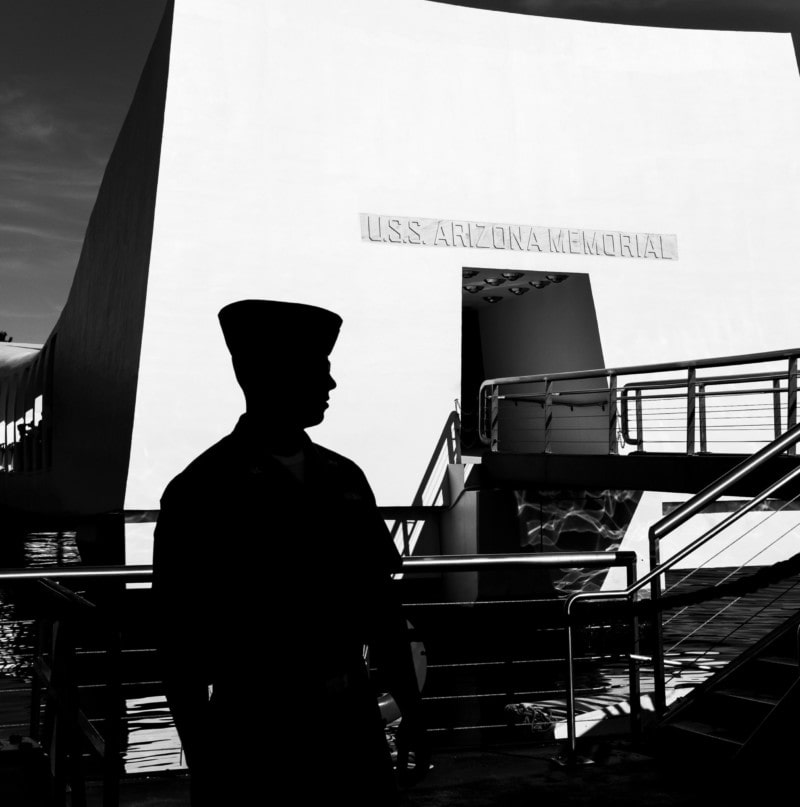 You can quickly switch back and forth between the contents via the table of contents:

The devastating attack on Pearl Harbor

The surprise attack of the Japanese on the headquarters of the US Navy 'Pearl Harbor' remains in the memory of the whole world. An event with devastating consequences, which demonstrably changed the course of history. It cost thousands of lives and resulted in the entry of the USA into the Second World War.

The natural harbour of Pearl Harbor near Honolulu was once one of the largest harbours in all of Hawaii. Almost in the middle of the Pacific Ocean, Pearl Harbor is located about 4000 miles from Japan and about 2000 miles from the U.S. mainland. Because of its strategic location, it has been used as a U.S. Navy base over the years. Pearl Harbor became the scene of a terrible surprise attack on December 7, 1941, launched by Japanese forces. Without any warning, hundreds of Japanese fighter planes gathered over the U.S. Navy base that Sunday morning and destroyed quite a few naval ships. In addition to nine damaged battleships, more than 300 military aircraft were destroyed. However, the Japanese attack destroyed much more than the military arsenal. Over 1000 Americans were injured and about 2500 Americans lost their lives in the attack, including civilians. Immediately after the attack on December 8, 1941, under President Franklin D. Roosevelt, congress was asked to declare war on Japan immediately.

Even today, five memorials at Pearl Harbor remind us of the fateful and tragic events. Visitors are given the opportunity to see the scene of horror and the remains of the battleships and aircraft hangars with their own eyes. Survivors talk about the horrific and chaotic scenes that unfolded at Pearl Harbor on December 7, and visitors will remember the visit for a long time.

The Japanese Attack on Pearl Harbor

The U.S. and Japan had already been on the path to war for several decades and when no peaceful and satisfactory solution could be negotiated with the United States, the Japanese decided to take the only option that promised success. A surprise attack on the Pearl Harbor military base. The drafting of the plan and also the exercises of the Japanese forces took several months.

The plan was very simple - it was to destroy the entire Pacific fleet of Pearl Harbor. The Japanese turned this devastating plan into reality on Sunday morning, December 7, 1941. It was around 8 a.m. when the skies above the U.S. Navy base filled with countless Japanese aircraft and a literal rain of bullets and bombs pelted down on the Pearl Harbor military base and all the anchored ships. Just 10 minutes after opening fire, an armour-piercing bomb weighing nearly 800 kilograms struck the battleship USS Arizona. It hit the ship's ammunition magazine and caused a catastrophic explosion that sank the battleship with over 1500 men inside within 9 minutes.

Another 400 crewmen died when torpedoes hit the USS Oklahoma and the battleship went off balance. It fell on one side, filled with water and sank.

After a time of fewer than two hours, the surprise attack by the Japanese was over and all battleships in the harbour off Honolulu suffered considerable damage. After the attack, all but two of the sunk battleships were salvaged and fully repaired.

Effects of the attack on Pearl Harbor

More than 300 aircraft and nearly 20 ships were destroyed and deformed in the surprise Japanese attack. In addition to that, military facilities on land and associated airfields were destroyed and more importantly, 1000 people were injured in the attack and over 2400 marines as well as civilians lost their lives.

However, the Japanese plan did not work out completely. The goal of putting the fleet out of action could not be achieved. Purely by chance, all the aircraft carriers were not at the base in Pearl Harbor that day. Some were on the mainland, while others were delivering aircraft to surrounding forces. The base's main facilities, such as repair shops, oil storage and even submarine docks were also unharmed. These facts helped the U.S. Navy to be operational again relatively quickly.

On December 8, 1941, one day after the attack, the United States declared war against Japan and equally this event is responsible for the U.S. entry into World War II.

The background of the attack on Pearl Harbor

Although relations between Japan and the USA had already been strained since the Japanese-Chinese War, the attack came as a complete surprise to the Americans and without any warning. Negotiations on the further expansion of raw material extraction in Southeast Asia had been going on for a long time but had repeatedly failed. No peaceful solution could be found. Thus, the Japanese Empire decided on the only option with the potential for success. An attack on the naval base Pearl Harbor should put the US fleet out of action for a limited period. This was to give Japan enough time to gain the upper hand over the needed raw material areas in Southeast Asia.

The action movie Pearl Harbor was directed by Michael Bay and stars famous actors such as Ben Affleck, Josh Hartnett and Kate Beckinsale.

The war movie is based on the true events of the Japanese attack on Pearl Harbor. It shows the dark events linked with the romance of two navy soldier friends who have fallen in love with the same woman. Due to the surprise attack of the Japanese, the love story comes to an abrupt end, as thousands of soldiers are killed within just a few minutes.

The movie was released in cinemas and it was nominated for two Golden Globes as well as four Oscars. It also received an Oscar for sound editing.

In modern times, visitors have the opportunity to tour five historic memorial sites in Pearl Harbor, all places of silent remembrance, covered in sombre beauty. Sites in Pearl Harbor that are open to the public and show the horrific side of what happened are the USS Arizona Memorial, the USS Bowfin Submarine Museum & Park, the Battleship Missouri Memorial, the Pacific Aviation Museum and the USS Oklahoma Memorial. Each of the memorials tells a part of the dark events and brings visitors closer to World War II. The Visitor Center is the best entry point. Visitors are shown a film that talks about the attack. Also, plaques commemorate the victims of the attack.

After leaving the Visitor Center, a boat takes visitors to the final resting place and memorial to the victims of the destroyed battleship USS Arizona. A floating memorial has been created above the sunken hull of the ship. The names of the deceased are immortalized on marble plaques. An emotional moment for visitors.

One of about 250 submarines is the USS Bowfin, also known as Pearl Harbor Avenger. Visitors discover fascinating facts and amazing submarine technology during a visit to the museum. On a tour of the grounds, visitors will see the Waterfront Memorial, which was built to honour the fallen submariners of World War II. Probably the most interesting part of Submarine Park is the tour of the USS Bowfin. Visitors get an authentic impression of the submarine below deck and visit, among other things, the torpedo room or the crew's quarters.

The battleship functions nowadays as a museum and offers visitors insight into three wars of contemporary history. During the tour of the museum, visitors will see the massive battleship which weighs over 60000 tons. The Surrender Deck provides an opportunity to view the original documents that declared World War II. Over an area of three soccer fields and a height of 20 floors, it is possible to see battle ordnance, such as cannons and shells. Visitors who take part in a tour get to see closed-off areas and learn about impressive parts of the battleship.

Over 50 aircraft, such as propeller planes as well as jet fighters and the remains of the Ni'ihau Zero, can be seen here. The Ni'ihau Zero crashed over Ni'ihau Island after the attack on Pearl Habor and was one of the most famous military aircraft in the United States. Furthermore, the Pacific Aviation Museum features two hangars and the Ford Island Control Tower that survived the December 7, 1941 attack. Bullet holes and marks on the buildings are still visible today.

Nine torpedoes hit the USS Oklahoma battleship on December 7, 1941, sinking the 35000 ton battleship in just 12 minutes. Over 400 marines sank with the ship. The USS Oklahoma Memorial was built in their honor. 32 other soldiers were trapped in their watertight cabins, drew attention to themselves by screaming and banging, and were rescued by rescue workers after two days.

The five historical monument sites in Pearl Harbor can be visited within a full or half day. Depending on your historical interest, it takes between one and three hours at each of the monuments and the museums.

If you want to visit different memorials, you should book a boat ride in advance. It is recommended to start at the Visitor Center to purchase the tickets there.

The Pearl Harbor Naval Port is still an active naval base. Therefore, visitors are not permitted to bring bags of any kind, such as backpacks, diaper bags, or camera bags. Visitors who do not wish to arrive without luggage may use the luggage storage facilities at the Visitor Center.

Tommy
Certainly a different kind of "sight" (which I wouldn't call it...) on Oahu, but still so important to keep the devastating attack on Pearl Harbor from being forgotten and to make it even clearer to every visitor that war and greed is never a solution.
Our checklist & tips:

The long drive from Honolulu to Keawa'ula Beach, the last beach on Oahu's northeastern coast, is worth every trip.

On Oahu's west coast, Makaha Beach is one of the most popular, yet uncrowded beaches with great waves for su...
Menü
Oahu
Maui
Big Island,
Kauai
Molokai,
Lanai
All Hawaii Islands
Overview of all islands & background info